You’ve probably noticed that I haven’t been writing about Brexit of late. My last Brexit tagged blog was in early May, and you have to go back to March to find Brexit in the title. Unlike a lot of people in the UK, I can’t with hand on heart say that I’m tired of Brexit. The topic is complex and multi-layered. It can be looked at from the standpoints of trade and economics, climate change and the environment, human rights, shared research or cultural exchange. Brexit can be seen as a phenomenon of voter and media manipulation or as the catalyst to end party politics as we’ve know it in Britain. That is, for someone like me who enjoys reading and problem-solving through deconstruction, Brexit has been the gift that keeps on giving.

Writing about it has become another matter altogether. As soon as I get an idea for another Brexit blog, I read about it in a newspaper or magazine or hear that a book has come out with the same thesis. Among my favourite Brexit writers – I think this is a start of a genre – are Andrew Rawnsley, Nick Cohen and Will Hutton from The Observer, Polly Toynbee from The Guardian, Stephanie Baker from Bloomberg News and Steve Richards of The Independent and The New European.

Only a few days ago, I stumbled across the perfect quote for what I was going to write about in this blog – another failed attempt. Roger Cohen of the New York Times wrote: ‘The fantasy voted for in 2016 is not the reality of 2019… Democracies are exercises in constant reassessment. The core reason nobody has been able to deliver Brexit is that it makes no sense.’

It’s hard to improve on that.

All I can offer are a few reports gathered from my academic life. I’ve been hearing directly from researchers based at UK universities (many of them not British themselves) who have been excluded from funding applications because Brexit makes them ‘too risky.’ In another case, an academic organisation has changed its plans to have a British university host an international conference over worries that EU27 citizens might need visas to enter the UK. Underlying these examples, as with all changes to our lives brought on by Brexit is a sense of anxiety – sometimes it’s about the unknown, and at other times it’s about losing the good things that we do know have come from our EU membership.

As I struggle to find words to describe this anxiety – a vapid and overused word – I appear to be not writing about Brexit again. 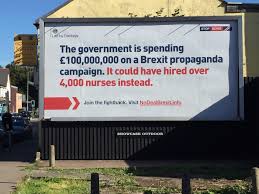