Of the Hilary Mantel trilogy, the first book is still my favourite, but now only by a whisker, having just finished The Mirror and the Light.  Of course, Wolf Hall has the advantage of being the first, the freshness of introducing the world of the text. Some might object to my ranking of these books, something film critics do all the time when faced with sequels, but it’s worth pointing out that the first film in a series is often the best received – notable exceptions including Godfather 2 and Lord of the Rings: The Two Towers.

Thinking about all three books in this way is useful from a writer’s perspective. While all three were immensely satisfying to read, I was less taken by the second book, Bring up the Bodies, mainly because I found it a bit soapy. Its main story was the demise of Anne Boleyn, her affairs – real and created by others. This second novel covers the shortest period of time of the trilogy, the king’s 3-year marriage to Boleyn, and was still a hefty tome. The pacing may have suffered. Wolf Hall takes us from Thomas Cromwell’s childhood through his stint as a soldier and working for Cardinal Wolsey up to his time as counsel to Henry VIII to the end of the king’s first marriage. The Mirror and the Light starts in the immediate aftermath of Anne’s beheading and continues through his brief marriages to Jane Seymour and Anne of Cleves. Over these four years, we follow Cromwell’s illustrious career expanding with ever new and important titles, while dealing with the lingering presence of the beheaded queen, the fraught interval between the king’s marriages, the religious revolts across the country and the rising clashes with the pope and other powers in Europe. This final novel also gives the impression of covering a greater time span in its references to persons and events from the earlier books.

Like the first two instalments, The Mirror and the Light uses the same dry sense of humour that comes out in the observations of the ridiculous self-serving characters and the system of aristocracy and the caustic wit of Thomas Cromwell. The anti-hero’s wry sense of irony and gift with language comes out not only when he speaks, but also in his internal dialogue (mostly free indirect thought, for you literary stylisticians).

On the topic of language, this is the highlight of reading anything by Mantel. While there are many quotable gems from The Mirror and the Light, I’ll share with you a couple of examples.

‘But the law is not an instrument to find out truth. It is there to create a fiction that will help us move past atrocious acts and face our future. It seems there is no mercy in this world, but a kind of haphazard justice: men pay for crimes, but not necessarily their own.’

On a lighter note, one of the chapters opens with this:

If this were a film review, I’ve just given you some clips, coming attractions that don’t give anything away. Staying with the analogy, let’s talk awards and prizes. Although The Mirror and the Light is well-deserving of a Booker Prize, Mantel already has her Bookers for the first two of the trilogy. Like Oscars, sometimes, it’s not about bestowing prizes on the best, but allowing others to win.

With few exceptions, the Man Booker Prize winner is not as good as half of its shortlist. I’m afraid for me George Saunders’s Lincoln in the Bardo follows this rule. I say this with some hesitation because I’ve enjoyed Saunders’s short stories over the years and because at times the writing in Lincoln is nothing less than brilliant.

Lincoln in the Bardo deals with the true-life story of the death Willie Lincoln, son of the famous president. An exploration of grieving and beliefs about death, it’s set primarily in the bardo – a concept taken from Tibetan Buddhism for an intermediate state between death and rebirth.  In this bardo the reader encounters several subplots with a host of fictional (and some fictionalised) characters of which the child Willie Lincoln is one.

Outside of the bardo lies the real world, told through the accounts of present-day historians and journals and memoirs of those living at the time. This genre mixing is a clever way of telling a story. But in order for it to work, the disparate parts, with their different voices and styles, need to be of roughly equal merit. For me, the accounts of Lincoln’s contemporaries were far more moving and interesting than the lives of most of the characters in the bardo. I found myself speed reading through the bardo in order to arrive at and savour the non-fiction passages.

The blending of fiction with non-fiction is an art. True mastery of this art form 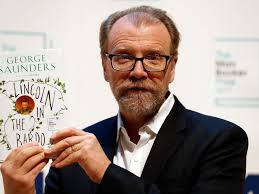 can be found in Hilary Mantel’s Wolf Hall and Digging up the Bones and closer to the non-fiction end of the scale in Truman Capote’s In Cold Blood. While Saunders’s Lincoln in the Bardo hasn’t reached its ambitions, it’s still a better, more innovative, read than much of what’s out there.