Watching flames through a firewall

As apocalyptic stories from Australia are already starting to play second fiddle to Trump’s war games, Harvey Weinstein’s trial and Harry and Megan’s flashy fugae , happenings down under and across the world are continuing to play out – even if we stop watching it or reading about it.

A couple of things are going on here. First, there’s the media’s coverage of these events. In ‘media’ I include social media and other spreaders of news – real and manufactured. These outlets inhabit the edges of the entertainment industry and will only repeat the same story so often. As the affects of climate change are becoming as common as the buddy movie, the media and their audiences quickly move on.

Of course, unlike the buddy movie, climate change is real and frightening. With that comes another reason why media coverage is waning and audiences are retreating. It’s what author Margaret Heffernan calls wilful blindness – there are things that we refuse to see. Taking insights from a range of people involved with deception, including whistleblowers, criminals, politicians and psychologists, Heffernan points out that people turn a blind eye to ‘avoid conflict, feel safe, reduce anxiety and protect prestige.’ To some extent the media is reacting to our putting on blinkers.

The other factor at work here still involves the media but runs deeper than that. Climate change deniers have gone into full throttle this past week to distance the catastrophes in Australia from man-made climate change.

When looking at neoliberal policies of recent decades, Naomi Klein points out the tremendous tax cuts to the wealthy classes and their corporations. Offsetting climate change involves investment in the public sphere – ‘in new energy grids, public transit and light rail, and energy efficiency.’ Given the scale of such projects, they couldn’t happen without raising taxes on the wealthy. Klein also points out that many green initiatives, such as ‘buy local’ to reduce CO2 emissions, clash with corporate free trade details.  Klein comes to this conclusion: 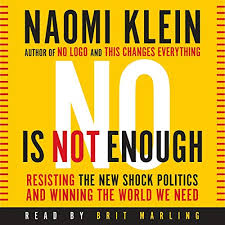 ‘In short, climate change detonates the ideological scaffolding on which contemporary conservatism rests. To admit that climate change is real is to admit the end of the neoliberal project. That’s why the Right is in a rebellion against the physical world, against science.’

The fires in Australia is the story of our day, the one the media has grown tired of or sees dwindling profits in, the one neoliberals don’t want us to engage with, and the one story that we ignore or play down at our own peril.