It’s polling day in the UK. If you’ve come to this blog seeking my election predictions, think again dear reader. My political crystal ball shattered into a million pieces in 2016 – first the Brexit Referendum, then Trump.

This election day is certainly the most important in my lifetime as a British citizen up against losing my rights as an EU citizen and as a citizen of a world that is facing a climate emergency. With all of this, what am I thinking about today – the spurious nature of truths.

There’s apophenia. That’s the tendency to mistakenly see connections between unrelated things. The term was first used back in the 50s to describe types of mental disorders like schizophrenia. Examples include gamblers who think they see meaning patterns in numbers or people who see images of the Virgin Mary in their cappuccino froth.

Zombie statistics are numbers that are bogus but are repeated so often they are assumed to be true. There are loads of these out there. My personal favourite is that only 10% of Americans hold passports. Interesting, given that some 20% of Americans were not born in the US – how did they get there? The actual figure, according to the US State Department, is that 42% of Americans have passports. (Okay, I know, it’s 66% for Canadians and 76% for Brits). Zombie statistics are believable because they feed into popular myths or make for good headlines.

In both apophenia and zombie statistics, the mind plays tricks with people, even otherwise intelligent people. As this election campaign comes to an ignominious end – it’s been plagued by concocted ‘news’ stories against rivals and blatant, easily disprovable  lies from a sitting Prime Minister – I can’t help but to think about the way our minds play with us and how we convince ourselves and create our own truths. 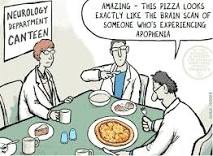