When I was a child I wrote a poem about pollution and I rhymed it with solution. My younger self believed that the problems of dirty air and toxic waterways would be remedied by the time I reached adulthood. I had already witnessed a change in the ways our Chicago streets were cleaner once the word litterbug entered our lexicon. For a decade or so, I allowed myself to be seduced by the view that the ecology movement (as we called it then) was finding that solution. We had unleaded fuel, the Clean Air Act and the Clean Water Act. We had taken the CO2 out of our refrigerators and attics were being insulated. It was just a matter of time.

Some forty years later, I find myself supporting Extinction Rebellion and last week, David and I joined in the Climate March in Nice. I was walking down Felix Faure heading towards Place Massena at an aging tortoise’s pace when I realised that this march was strikingly different from other marches. Unlike anti-brexit marches, there weren’t any protesters at the side lines swearing at us or calling us stupid. After all, who’s going to disagree with wanting to save our planet and improve our health and quality of life? That view hadn’t changed since my childhood.

But something else had changed. There are now climate change deniers. I know, I have waxed on about this sub-human form before.  But to date, the only ones I know are far-right politicians and the companies that sponsor them, those who have the most to lose financially by switching to clean energy. These are not the kind of protesters who take their arguments to the streets. Their methods are more insidious.

I also noticed a few gilets jaunes in the crowd in Nice. These are the people in high 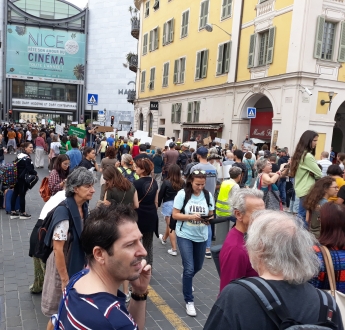 -viz yellow vests that have been protesting every Saturday across France for nearly a year now. Most of their protests have been aimed at tax reforms and the lack of spending power for low to medium income individuals. Ironically, the origins of the gilets jaunes movement were over the carbon tax on petrol,  a way of reducing France’s carbon footprint. The gilets jaunes were against it. Is it that they now join any protest that comes along? Or has the last year of climate protests and public discourse about our environment changed their minds?

I don’t want to be seduced into positive or complacent thinking again.

I’ll end this blog as I started it with lines from a poem. This from American poet Rita Dove:

Hold your breath: a song of climate change

The water’s rising
but we’re not drowning yet.
When we’re drowning
we’ll do something.
When we’re on our roofs.
When we’re deciding between saving
the cute baby or the smart baby.
When there aren’t enough helicopters
or news crews to circle
over everyone. When sharks
are in the streets. When people
are dying…