It’s hard to follow the elections in the Democratic Republic of the Congo without a sense of disbelief coupled with exasperation. As I write, voting has ended, although millions have not been allowed to vote supposedly due to security issues and another outbreak of Ebola. While the votes are being counted, amidst rumours of fraud and both main parties claiming victory, Congolese officials have shut down the internet and SMS services. I feel as though I’m still in the storyline of The Poisonwood Bible.

Barbara Kingsolver’s novel is a heart wrenching and often humorous saga about an American family whose patriarch transports his family to the Belgium Congo to convert people to Christianity. Unfortunately for them it’s 1960, when the Belgians give the Congolese their independence after more than 100 years of oppressive, exploitative colonial rule, started by the notorious King Leopold II. The Price family, already having difficulties – many self-inflicted – with living in the Congo, become entangled in the hostilities against whites, while Belgium and American companies continued to have a stronghold on the rubber plantations and diamond mines. Tensions grow within the Price family following the death of one of the daughters and for the country after President Eisenhower had the CIA assassinate the first democratically-elected prime minister. The Congo becomes Zaire and the Prices split in several directions, some returning to America, others remaining in Zaire and elsewhere in Africa. All of them scarred for life from their time in the Congo.

The engaging narrative weaves together five monologues told by the four daughters and the mother. Each passage of monologue is marked by turns of phrase and the limited wisdom and naivete of each narrator. This made me think of my childhood growing up in America when I thought that Africa was a country prefaced by the phrase ‘starving people.’  Some forty plus years later, Africa is a continent and the Democratic Republic of the Congo is a country still suffering under the weight of poverty while its mineral resources are now being drained by multi-national companies for use in high-tech industries. In the intervening years and since the publication of The Poisonwood Bible in 1998, the country has been through civil wars, outbreaks of Ebola and famine and large-scale corruption, essentially giving corporate sponsorship to territorial warlords. This week’s elections marred by violence and injustice are a testament to this oppressive way of life, but also to the resilience of its people.

This week as I watched television and read the newspapers, amidst the reports from the DRC, I saw the New Year’s fireworks and festivities at the usual places – London, Paris, New York, Sydney, Rio de Janeiro, Dubai, Hong Kong. But not one African capital. Our media coverage of world events makes Price family members of all of us. 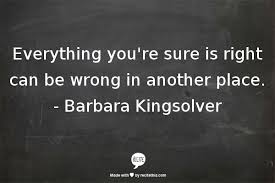