Last week, I visited Berlin with the intention of, among other things, dipping into the world of Cabaret and the writings of Christopher Isherwood. This might sound odd given that Isherwood’s Berlin was during the 1930s. But I haven’t been in this city since the early 80s, when I could only go to West Berlin, and I rationalised that the present day with a reunited Berlin might appear more like the days of Weimar Germany than my last visit.

We stayed in a hotel in the former East Berlin, with its 60s and 70s austere blocks of buildings and its wide roads, intended for tanks to topple any revolution. Aside from the timeless train stations and pillar boxes covered with posters, little else felt like Goodbye to Berlin, Christopher and his Friends or those iconic scenes from Cabaret. My imagination could have filled in the gaps if I hadn’t run up against a wall – the Berlin Wall, of course.

The remnants of the wall serve as reminders of the latter half of the 20th century and fears that the cold war would escalate into a combative war, or worse still, a nuclear war. My mind shifted far from the world of seedy night clubs and Sally Bowles. I was once again tainted by living in the age of Trump. With the reign of the 45th president, literal and metaphorical walls have become pervasive. While I write this, armed guards along the US-Mexican border have started using teargas against economic migrants and asylum-seeking refugees.  These acts seem that much more ludicrous in the knowledge that illegal crossings at this border are at their lowest since they peaked in the early 2000s (Source: USGov Border Statistics).

I’m reminded of a poem I first read as a child. Robert Frost’s ‘Mending Wall,’ pointed to the absurdity of such walls with obvious political metaphors:

There where it is we do not need the wall:

He is all pine and I am apple orchard.

My apple trees will never get across

And eat the cones under his pines, I tell him.

The physical wall that Trump is trying to build has been drummed up with the president’s usual bluster and hate-filled rhetoric. More concerning to me are those other walls being built behind the scenes and not necessarily from Trump himself, but from the far-right that supports him and have been empowered by him. Again, I return to Frost:

…I see him there

Bringing a stone grasped firmly by the top

He moves in darkness as it seems to me,

Not of woods only and the shade of trees.

For Germany, and more importantly for western Europe, the tale has a happy ending. Not only did the wall come down – as ideological walls inevitably do – but it also helped to nurture the peace movement that continues in many forms across Europe today. One stretch of the old wall captures this spirit with paintings and graffiti.

As I return to life in France and England, I wonder what Christopher Isherwood, who became an American citizen and died three years before the wall came down, would have thought of all of this. 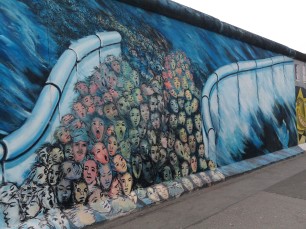 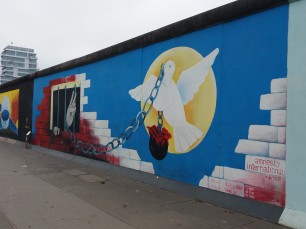