No, this is not about The Daily Mail, Boris Johnson or David Davis. Nor is it about high-profile victims Gina Miller, Supreme Court Justices or Peers in the House of Lords. This is far more personal.

We think it started during the EU Referendum campaign, when my David and I discovered that an egg had been thrown at our front door. Ours was the only house at that end of our long street with a Remain sign in the window. We didn’t think at first that the splattered egg had anything to do with politics. When we entertained the notion, we quickly dismissed it. After all, we live on a street with pedestrian traffic between the convenience store and the primary school. It was probably kids mucking about. We also reminded ourselves that we live in Ely, among other things a dormitory town for Cambridge with its universities and high-tech businesses – people who are likely to vote remain.

Those explanations have been reconsidered and our analysis has been rewritten in recent days after the rear windscreen wiper of our car had been torn off – no easy feat. It had happened during the night. But why our car when we’re at the brightly-lit end of the street? Straight away we suspected that this act of vandalism had something to do with the small EU flag in our front window – the only EU flag on our street and only one of a few in the whole town.

The gooey broken egg and now a part of our car. We were feeling targeted.

I’ve been on the wrong end of bullying before, once at a job and at other times in my own family. But my past experiences with bullying had some sort of logic to them, an acting out of envy, with the intention of removing me from the scene. That is, I held meaning in the lives of the bullies.

When an absolute stranger(s) attacks, one wonders why. Instead of acting out of envy, these aggressive brexiteers are likely acting out their anger that Brexit is not going the way it was planned or promised – the NHS is not going to receive more funds, in fact, it’s losing staff – the great trade deals with America and Commonwealth countries are laughably unlikely – problems with the Irish border could result in a fudged Brexit within the domain of the EU – to name a few.

The displaced anger is obvious, the intent less so. Do these vandals think that their actions will turn me into a brexiteer? Or are they trying to scare us into removing our signs and flags so as to not advertise that there is an organised movement against their views?

I filled in an online police report about the ripped off windscreen wiper. After giving all of the routine information – make, model, location, damage etc. – I was asked if I suffered any personal physical or mental injury. I ticked the mental injury box without hesitation. I was upset and shaken and felt vulnerable. This triggered another box to appear, asking if I wanted to join a support group. Really? Is there a support group for people who have had their cars vandalised? Or better still – is there a support group for people who have been bullied by brexiteers? This latter group I imagine would be full to capacity and I’d have a place on one of those notorious NHS waiting lists. 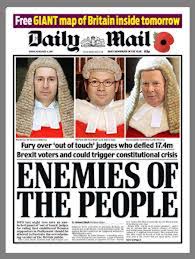 There’s also the possibility that I’m all wrong. Our egg-stained door and damaged car could be coincidences and could have nothing to do with Brexit.  But in the socio-political climate we live in, an innocent explanation is hard to contemplate. I guess I’ve been writing about The Daily Mail and its political heroes after all.