In truth, the march had been cancelled. Following the terrorist’s attack in Nice only some seven months ago, the city had decided not to give a permit to the women’s march yesterday. Some of us didn’t know about this. Others knew and were defiant. Unfortunately, others stayed at home or went to marches in Marseille or Montepelier. In the end we had about 100 protesters, mostly from America and Britain, but also from France, Holland, Turkey and South Africa. That was enough to gather around the statue of Apollo, take photos of each other and send them to Twitter and Facebook before heading out to march along the Promenade des Anglais up to the Negresco and then back on the other side of the street to return to Place Massena. This was naturally followed by political banter in nearby brasseries and cafes.

This march may have been on a small scale, but as it was linked in ideology and spirit to marches around the world, especially the one in Washington, it was a big deal. The women I spoke to felt it necessary to be there. When someone as devisive and aggressive to the world and insulting and hateful towards women as Donald Trump emerges, the only choice is to fight back. I hope I never lose my own sense of connectedness to the world and willingness to fight when confronted – even from miles away – by such a menace. 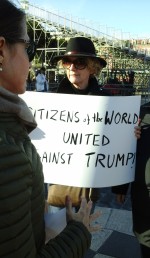 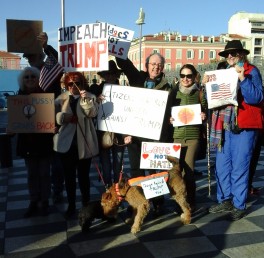 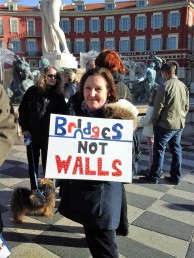