The Observer recently published in its glossy magazine ideas for Christmas gifts, the latest items to buy that you can’t think of yourself. Under the category ‘Gifts for Her’ were candle holders in the shape of a partial female nude. It only had the upper thighs and beautifully fit buttocks, stopping at the waist. That is, it also lacked breasts and legs, one could argue, making the objects less titillating and therefore something appropriate to purchase for ‘her’ this Christmas. But not this ‘her.’ Straight away, I felt uncomfortable with this gift idea.

As the photo in The Observer only showed the back of these candle holders – a set of three in the female-friendly colours, I suppose, of red, pink and purple for £110 – I visited the seller’s website in the hope of seeing the fronts. I was curious if they had a triangle of pubes or were more like Barbie and bald. This curiosity was not to be satiated. The items weren’t there and I had to assume that they had sold out. Obviously, others weren’t put off by these objects as I had been. On that point, I also noticed that there haven’t been any published Letters to the Editor or comments on the website about these female-buttocks candle holders.

I did, however, find some candlesticks by the same designer, Anissa Kermiche. These were also of women’s bodies, including breasts, but still excluding heads. I found these shapes aesthetically pleasing and reminiscent of Matisse’s famous blue and white paintings of female nudes – only his women had not been decapitated. Perhaps it is the lack of heads in these gift items that bothers me. Headless women objectify the female body and in ways for which you’d be hard pressed to find male equivalents. Nude male bodies without their heads if used for household items, usually come with a wink and a chuckle.

All of this brings to mind Margaret Atwood’s much-quoted essay on the female body, which includes this vignette:

The Female Body has many uses. It’s been used as a door-knocker, a bottle-opener, as a clock with a ticking belly, as something to hold up lampshades, as a nutcracker, just squeeze the brass legs together and out comes your nut. It bears torches, lifts victorious wreaths, grows copper wings and raises aloft a ring of neon stars; whole buildings rest on its marble heads.

Conclusion, if you want to buy me a present this Christmas, skip the headless women, a book is always a safe bet, or perhaps a Matisse 2022 calendar.

It’s a sad story that doesn’t make you miserable. Quite the contrary. I would even add it to the list of sad things that bring pleasure, up there with paintings by Edward Hopper and Ravel’s Pavane pour une infante défunte.

Hannah Kent’s debut novel Burial Rites uncovers the life of Agnes, a murderess, sentenced to death in Iceland in the early 19th century. The illegitimate daughter of a poor servant, who abandoned her when she was a child, Agnes also enters a precarious life of service. The reader learns of Agnes’s early years in retrospect and interspersed with the novel’s present day, where the lack of prison facilities in sparsely populated Iceland means Agnes is sent to live with a local official and his family until her execution. The wife, Margrét, and two daughters, Lauga and Steina, take Agnes in as a matter of duty but grapple with their emotions, ranging from fear to fascination. During this time, Agnes is required to have her soul cleansed by the apprentice Reverend Tóti in preparation for her death, hence the title.

Despite the bleak setting, taking the reader from the short days of autumn to the even shorter days of winter, in a world where life is hard and death often brutal, this is a heartening tale, full of richly drawn characters and their inner journeys. The family and the reverend grow from their interactions with Agnes. As they share the harsh quotidian of rural life, Margrét and Agnes develop a sisterly bond. Reverend Tóti  soon realises that the fire and brimstone approach would never work with Agnes, who knows her scriptures as well as he does, and learns the power of listening and that much of what he thought was true was riddled with misjudgements and superstition.

While this book was first promoted as a kind of Scandinavian crime novel, the genre of historical fiction might be more accurate. This is based on the true story of the Illugastđir murders, with attention paid to the documents of record at the time and the detail of life among the Icelanders of that region. This includes the interesting fact that Iceland had high levels of literacy even in the early 19th century.

Some readers have compared this to Margaret Attwood’s Alias Grace, whose fictional account of a true life murderess is set in Victorian Canada. In addition to the shared subject matter, both writers employ multiple narrators, where the first person account from the murderess stands in contrast to an omniscient third-person narrator, alongside other voices, such as those of poets and authors of official documents. Attwood’s use of this technique appears more forced and aesthetic, arguably pretentious in places with some of its textual choices. Kent’s retelling of an historical crime is more substance over style, a naturalism fitting the events and their time. Common to both novels is an awareness of the suffering of women for their intelligence. Attwood’s Grace conceals her intelligence to help her gain a pardon, while Kent’s Agnes is judged by officials as a clever woman thus capable of evil. I accept these depictions as true of their time (and to a lesser extent true today) – a sad truth, the type of sadness that is not pleasurable. As this point serves as a minor theme, the Kent book is nevertheless worth losing oneself in.

If you’re expecting light-weight, page-turners for the beach, you’ve come to the wrong blogger. For reasons unknown, I like thematic and/or challenging reading over the hot months when I don’t usually have writing deadlines and my colleagues and students are on extended breaks.

A couple of years ago I had an Isherwood summer, rereading Goodbye to Berlin and reading for the first time a couple of volumes of memoirs surrounding that time period in Isherwood’s life. I escaped into that world quite easily, making it one of my more memorable reading summers.

This summer hasn’t followed a theme, but has been a time to catch up with books people have passed on to me and those Kindle books that I picked up on sale and forget that I had them. The summer started with Jonathan Franzen’s hefty novel Purity. This dark comedy is like other Franzen novels, very much a mocking reflection of our times. It interweaves seven overlapping sections of narrative into one story of surveillance culture, social media paranoia and clumsy sex. While I did internally chuckle along the way, I was uneasy at times with his often psychologically weak and yet manipulative female characters.

After that 500+ pager, I needed a novella. Lionel Shriver’s The Standing Chandelier is an excellent study on the psychology of relationships. It stands off a plutonic friendship with a former lover against the relationship that will end up in marriage. While Shriver exercises precision in her word-choice and descriptions, I felt it was in places a bit overwritten, with too much telling analysis, rather than showing and allowing readers to draw the conclusions for themselves. But still a worthwhile and thankfully short read.

Catching-up with my booklist has meant that I’m finally reading Atwood’s The Blind Assassin. I’m not overtaken by the story-within-the-story, and since most of you have probably already read this, you’ll know what I mean. But the main story, set in the early part of 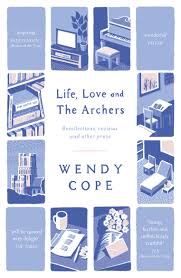 the 20th century in Canada, is exquisitely written and fully engaging.

I confess that I read a book earlier this summer that for some might be deemed a beach read. Wendy Cope’s collection of prose, Life, Love and the Archers, can be read in bitesize segments, which I guess qualify it for the interrupted reading associated with beaches and sitting out in the garden. Like her poetry, her prose is accessible, thought-provoking and often humorous.

Another beach book of sorts on this season’s eclectic menu is Antoine Compagnon’s collection of vignettes from the 16th century philosopher Montaigne, couched in Compagnon’s historical and biographical commentary. Even the title suggests summertime beach reading – Un été avec Montaigne. That is, summer reading if you’re French. I’m having to look up the occasional modern French word and use context and basic Latin to guess some meanings of archaic terms. Language aside, it’s been interesting to learn that Montaigne was ahead of his time in being an anti-colonialist, drawing attention to the barbarism and oppression Europeans brought to Africa and the Americas. His comments on gender fluidity and hermaphroditism also read as if from a more 21st century liberal-minded time.

So, those are the highlights of the summer book reading, naturally sandwiched between newspapers, online magazines and short stories. Happy reading and stay cool (in every sense of the word).