Book promoters must believe romance and chick lit sells better than stories about families affected by war and human trafficking. The Japanese lover in Isabel Allende’s novel is really a character of a subplot that draws other characters (not the lovers) together and as a loose commentary about interracial relationships in post-war America. The romantic elements play second fiddle to a story that starts with Jewish immigrants fleeing Hitler’s Europe and continues with a Japanese family in California sent to an internment camp. These elements run alongside a more modern story of immigration from poverty in Moldovia only to face slavery and child abuse in America. Embedded in both stories are romantic relationships, but two of which are not truly romantic – an unrequited love and a marriage of convenience.

The novel should have been entitled Lark House as that’s the name of the free-spirited and eccentric residential home that brings together the two stories and their main characters. Alma is one of Lark House’s more independent residents. A painter and designer from a wealthy family who was brought to America as a child to escape the war in Europe, at the end of her life, she meets Irina, a young care worker. While Irina struggles to come to terms with the abuse of her past, she befriends Seth, Alma’s grandson. The young friends piece together Alma’s mysterious past, uncovering the older woman’s affair with Ichimei, the son of her family’s gardener. 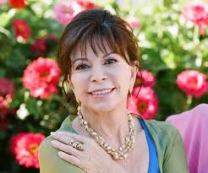 While Allende weaves these plots together seamlessly, her prose isn’t remarkable. At times, the omnipotent narrator is so distance from the characters and their physical surroundings, some passages read like journalistic reportage. That aside, it still was a good read and often hard to put down.