I grew up in Rogers Park, Chicago in the 60s and 70s. My childhood was post-civil-rights movement and pre-multiculturalism. My parents’ generation had labels for the neighbourhood. The west side of Rogers Park was still ‘predominately Jewish’ and therefore white. The east side, where we lived was ‘changing.’ In East Rogers Park, there still were many Jewish families, some Russian, others German. Other groupings to describe the east side weren’t based on religion, but on the countries their parents and grandparents came from. We had the Italians, the Irish, the Poles and the Puerto Ricans. Sprinkled among these were some Chinese and African-Americans (we used the word ‘blacks’).

If you had asked me when I was living there, how I would describe my neighbourhood, I wouldn’t have used any of these labels. I would have said that it was a ‘cool’ neighbourhood because it had a lot of movie theatres, public parks and shops and restaurants. I would have also mentioned that it was a mix of three-storey apartment buildings and red-brick houses and that it ran along the lake front. I would have located this neighbourhood in terms of its train stations, the elevated line that runs from Loyola to Howard Street.

This isn’t to say that I was unaware of religious and ethnic divides or the prejudices that come with it. The grandparents of a couple of my school friends still had numbers tattooed on their arms from the Nazi concentrations camps. And there were plenty of jokes – the Italian, the Irishman and the Pole go into a bar… At high school, students segregated themselves in the cafeteria with blacks and Puerto Ricans having their own tables, while the whites were mixed in together. In my memory, at the white tables we didn’t make disparaging or racist remarks about kids at the other tables – that would have been ‘uncool’ and ‘racist’ – words no one wanted to be called. And ‘immigration’ was never a topic. Back in ou 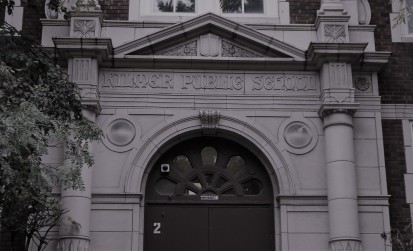 r classes and more importantly on our sports teams and clubs, students from different backgrounds played, worked and joked together.

I don’t wish to turn back the clock to my childhood in the ‘changing’ neighbourhood as it came with its own problems – among them, the tensions between the generations on issues of race and ethnicity. I know America has changed since then. To what extent is hard to say, living in Europe as I do. The current wave of fascism in Trump’s America was introduced through democratically-held elections, while at the same time it’s being fought both in the media and on the streets by what appears to be a majority. Perhaps America is ever-changing and perhaps that comes with democracy. I am worried that it’s becoming, to use a word from my youth, uncool.