With the lockdown, many us of have had the pleasure of observing more creatures, breathing in palatably cleaner air and hearing birdsong on a scale never heard before. In some online circles, this has produced a ‘back to nature’ movement that goes far beyond the obvious need to reduce greenhouse gases to save our planet from becoming an over-heated death trap. Sorry to be so grim.

The Observer columnist Kenan Malik rightly criticised this wave of naïveté, its meme ‘The Earth is healing, we are the virus’ and much of the pro-nature public discourse around it (10 May 2020). It’s not that climate change or the toxic environment we live in are desirable. Far from it. But should we let nature take complete control?

For the first time ever I have seen goldfinches in a park and a private front garden in our town of Ely.

Nature is not entirely benign. I’m reminded of Tennyson’s image of nature as ‘red in tooth and claw.’ There is a litany of natural disasters that have destroyed homes and livelihoods and have brought about disease and taken lives for centuries. Humans have reduced some of the impact of these disasters by engaging in some nature-defying sciences and technologies for which any sentient being is grateful.

I inhale the cleaner air and notice the quieter streets as I jog through town.

Malik argues that romanticising nature is the preserve of those who live in rich countries with electricity, transport systems and access to medicine. I see the truth in this and saw this idea crop up a few days later when I was watching a lockdown YouTube video from the Royal Academy of Arts (Painting the Modern Garden: from Monet to Matisse). One of the expert horticulturalists pointed out that with modernity came the growth of the middle classes and the idea of creating gardens for pleasure.  That is, gardening was no longer just about growing the potatoes and other veg to sustain lives. At least not in richer countries and this is still true today.

I have never seen an orange-tip butterfly until two weeks ago.

I’m left both enlightened and uneasy with Malik’s conclusion: ‘It is the poor, whether in rich countries or the global south, who must suffer from industrial pollution, are most imperilled by climate change and most threatened by the consequences of coronavirus. This is not because humans are violating nature, but because societies are structured in ways that ensure that innovation and development remain the privilege of the few, while deprivation and ill health are the lot of the many.’

This could be misread as a denial of humans violating nature. I trust that Malik knows that humans have violated nature, but they have also fought it in order to save lives, as Malik notes in his examples. It is also true that social inequalities have played a huge role in the climate crisis we are now confronted with. I think we can acknowledge these points, stay clear of romanticising nature, while still appreciating the ways nature has been showing off while much of the industrial world is in lockdown. 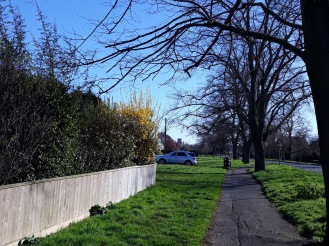