Like millions across the world, I’ve recently seen the Netflix programme When They See Us, a dramatization of the ‘Central Park Five’ story.

The four-part series has not been easy to watch. Even though I knew the five – teenaged boys at the time – were eventually exonerated, it was still painful viewing. This is more than just a story of African-American and Latino teenagers being interrogated by white police to the point of signing false confessions. The story follows the five convicted men and their families during the periods of incarceration (6-12 years) and their lives after prison before their verdicts were changed.

While the programme is being applauded for its accuracy, its verisimilitude, it’s important not to forget that this is drama. I don’t say that as a criticism – in fact, just the opposite.  As a work of dramatic art, it sometimes plays with the timeline, jumping back and forth to isolate each man’s story as a mixture of conviction and so-called ‘freedom’ once they were released with criminal records. And like any good dramatic script, the worst case was saved for last – one of the men, Cory Wise, was 16 at the time and was sent to Richter’s Prison for adult men, where the treatment by his fellow inmates was so excruciating he opted for years of solitary confinement. These renderings that truncate the years and reorder and select their most emotive moments for maximum effect are clearly features of art. In my eyes, the director/co-writer, Ava DuVerney is an artist of the highest calibre in creating these effects.

I also know that this is art because I enjoyed it so much and bring it to the attention of anyone I know who watches Netflix. True, it’s painful and sad and evokes a sense of fear. It’s what Aristotle called the paradox of negative emotions. We enjoy pity and fear in tragic drama even though we would not in real life. The fact that this drama was based on real life didn’t take away from that. If anything, the work blurred the lines of emotional responses as it blurred the lines of dramatization and reality.

And yet another emotion emerged from watching When They See Us – a palpable sense of shame. I remember when the story first broke. It was April of 1989 and I was still living in Edinburgh. The news story came to me as one of a woman jogger in Central Park in the wrong place at the wrong time – out on an evening when gangs of youth were ‘wilding’ – just acting wild, scaring passers-by, vandalising property and raping and beating a woman and leaving her for dead. That’s how it was reported at the time, consistently across Channel 4, BBC and any newspaper I happen to be reading. I later learned that this is how it was reported in the US as well. The story seemed so straight forward – a horrible, sickening crime. When the five teenagers were arrested, I remember thinking that it was a good thing someone was caught. But I also felt uneasy that they were all black and one Latino – ‘black and brown boys’ a phrase I have heard since – and that the victim was white. Such happenings feed into the racist’s view of the world, leaving us liberals appearing naïve and soft on crime.  I allowed myself to fall for the media interpretation – the story wasn’t about race, but about women being victims of rape, and this was one rare time when the guilty were caught. And if that wasn’t bad enough, shameful moment number 2 – the idea of confessing to crime a person didn’t commit wasn’t even in my world of possibilities.

Sometimes it takes a case like this to shake people out of their comfortable thoughts. This true-life story was obviously about race – the discrimination against African-Americans – and the DNA evidence confirmed that people – especially teen boys under interrogation – can confess to crimes they did not commit. 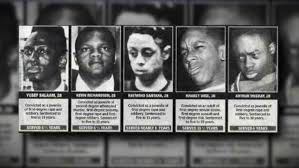 Postscript – I’ve entitled this ‘the exonerated five’ to help the language and labelling to catch up with the truths.