Last week saw the death of Sheila Michaels, the woman credited with ‘introducing the honorific Ms into common parlance,’ according to the NYT obit.

Virtually any time I give my name to a stranger, whether it be a builder, a ticket office clerk, shop keeper, whatever, I am asked ‘Is that Miss or Mrs.?’ This question in itself divides the UK from the US, where people often don’t use title at all, just the person’s name. Here in England, when I respond with ‘Ms’ I’m typically looked at with a baffled expression. Sometimes the person tries again, as if my accent either made my response incomprehensible or my brain too small to understand that Ms was not one of the options. One time, a Cambridgeshire garage owner even asked me what it meant. I had to explain that Ms is for women whether they are married or not, like what Mr is for men.

But most of the time, the linguistically constipated stranger ignores what I’ve just said, looks at my hand, sees the wedding ring and writes down ‘Mrs.’ Problem – I’m not Mrs Trimarco – that was my mother, or some other woman who married a Mr. Trimarco in generations before mine. Like so many women, I chose not to change my name when I got married. Not only do I object to the symbolism that I become my husband’s goods and chattels upon marriage, but having been published under my birth name makes any name change professional suicide – not to mention downright messy. For those of you who say that it’s easier for the woman to change her name if she has children, I say wake up. With all the stepparents, foster parents and other guardians with different surnames to their little ones these days, people’s expectations have changed. 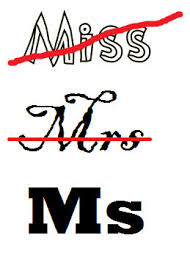 I haven’t yet run into an equivalent for Ms in other languages, but there are countries that either no longer or never have used titles to distinguish married women from unmarried ones. These include, surprisingly, Iran and South Korea, two countries with notorious track records for the oppression and ill-treatment of women. Moreover, in both Iran and South Korea a woman keeps her surname after marriage. Having said that, one Korean woman once told me that a woman kept her maiden name so as to not confuse the family tree in a country where ancestor worship is paramount. Her interpretation on all of this was that women didn’t count in the tracing of family trees, that they were mere conduits of babies, not important enough to have their names passed on.

In some South American countries, a woman becomes a signora, but her surname stays the same. When she has children, part of her surname, usually a double-barrelled one like Sanchez-Perez, goes to her children. The other half of the children’s double-barrelled names comes from their fathers.

So, what’s the problem with Britain? Maybe people here resist the title because they’re used to Miss or Mrs, or as one shopkeeper once told me ‘it’s only for feminists’ (as if that were a bad thing). Are things all that bad on this score here? Well, just a couple of years ago, I felt a glimmer of hope when I went to the opticians and was given a form to complete that gave me the options Miss, Mrs, Ms, Dr, Mr. I happily circled Ms. I turned in my completed form to the receptionist, who looked at it carefully and said, ‘Is that Miss or Mrs?’

Fast-forward to a few days ago. I was at Homebase getting a quote for our bathroom refurbishments when the bathroom designer, sitting at her computer, was filling in my contact details. A dropbox for titles came down with Mr, Miss, Mrs, Ms, Dr etc. as she asked me my title. Seeing the options, I said, ‘Well, Ms or Dr, either is fine.’ She looked at the ring on my hand and said, ‘But you are a Mrs, aren’t you?’ It was clear that that was her preferred option, a world she understood.

I replied, ‘But I’m not Mrs Trimarco. My husband isn’t Mr Trimarco. I didn’t change my name when I got married.’

Her expression was too plain for me to tell if she was an anti-feminist, repulsed by the title, or simply confused. Finally, she said, ‘Okay, let’s use Dr then.’