Occasionally the screensaver on my Kindle pops up with the dour face of Emily Dickinson. She has become one of the most recognisable faces in American literature. Yet, only recently has her life been transferred to the screen with Terence Davies’ A Quiet Passion.  The film d’auteur has its tableau moments, which slows down the pace and might not appeal to some viewers. But I found this fitting with the nature of Dickinson’s poetry – her elliptical language could cause images to freeze in the air. I liked too that the film contained sharp, intelligent dialogue in keeping with the dialogic style of many of Dickinson’s poems.  At the same time, these dialogues – many between Emily and her sister – remind audiences of the social li 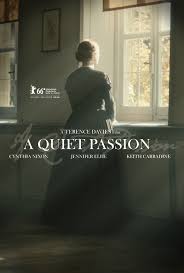 mitations thrusted upon 19th century New England life, especially for women. Although mostly a contemplative and melancholic film, humour and wit are present in a way that I felt was realistic to the poet’s life (Dickinson scholars are free to differ on this point.)

I’m also grateful to this film for reminding me that Dickinson wrote some poems about the US Civil War. We tend to think of Walt Whitman as the Civil War poet and of war poetry as being a male preserve.  But here is a Dickinson sampling:

Flags, are a brave sight —
But no true Eye
Ever went by One —
Steadily —

Since I was a teenager, I’ve liked Dickinson’s work, though I confess that there was a lot I didn’t understand younger. I think her writing and people’s understanding of it has been more helped by cognitive poetics (and other areas of literary stylistics) than by traditional literary criticism with its focus on biography, religion and history. Cognitive stylistics has shown how Dickinson manipulates grammar and word-choice to create different worlds that wrangle with, among other things, ontological questions. Here, I’m thinking mainly of the scholarship of Margaret Freeman, who gives a wonderful analysis of one of my favourite Dickinson poems:

A Spider sewed at Night

Upon an Arc of White

If Ruff it was of Dame

Or Shroud of Gnome

His Strategy Was Physiognomy.

I think it’s time to return to this poet and see how I get on with her language and wisdom in my middle age.